About the analyses and illustrated trends

Canadian Migration Monitoring Network trends are displayed only for species at each site that meet the following criteria:

Key to Analysis Codes and notes on interpretation of trends

Analysis for each species is limited to the dates the species is moving through the site. Long-term average daily counts were plotted against date, and the analysis “window,” incorporating approximately 95% of the migratory movement, was selected as the dates between which numbers clearly begin to increase and when they return to a relatively steady level following the migratory surge. The same procedure was used for species whose entire migration was not fully covered (i.e., the window omits dates when the species is absent or at low basal levels). For all species with no clear pattern of movement into and/or out of the area (such as resident species, many “O” species, and irruptive species with irregular timing), the window was defined as the entire seasonal coverage period for that site.

No results are produced for species that do not meet a minimum level of abundance or frequency during the site’s seasonal coverage (average of 10+ detections and detected on 5+ days).

Trends for species meeting these criteria can be interpreted as representing change in population size within a large area of the stations' catchment area (the portion of breeding range sampled by that station).

Trend maps show the estimated population trend over the most recent ten-year period for sites that meet the criteria for that species. 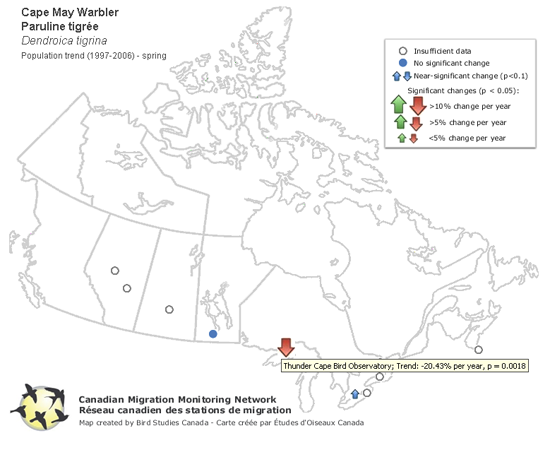 Seasonal abundance graphs are plots of information showing phenology and abundance of all species regularly sampled at the selected location.

Long-term trends in count were estimated independently for each species, site and season using a Bayesian framework with Integrated Nested Laplace Approximation (R-INLA, Rue et al. 2014) in R (version 3.1.3; R Core Team 2014). We estimated trends using log-linear regression, which included 1) a continuous effect for year (i) to estimate log-linear change in population size over time, 2) first and second order effects for day of year (j) to model the seasonal distribution of counts, and 3) hierarchical terms to account for random variation in counts among years and among days. Number of observation days each year was included as an offset to account for variation in daily effort:

where γ_i is a first-order autoregressive (AR1) random effect for year to account for temporal autocorrelation among years, and η_jis an independent and identically distributed (IID) hierarchical term to account for random variation in counts among days of the year. For monitoring stations with more than one site (e.g., Long Point Bird Observatory), the regression also included a fixed site effect, as well as interactions between site and the first and second-order day of year effects. While we recognize that an AR1 random effect for day of year nested within year might have been more appropriate to account for temporal autocorrelation among daily counts, we found that specifying the random day effect as IID had no noticeable effect on trend bias or on probability of estimating a precise trend (probability that the simulated trend fell within confidence limits of the estimated trend; T. L. Crewe, unpublished data). Specifying the random day effect as IID did, however, significantly increase the speed of analysis, and reduced the probability of errors using INLA.

We assumed a Poisson distribution of counts, unless the proportion of 0-observation days across years was >= 0.65. This cut-off is somewhat arbitrary, and should be examined in greater detail, but see Crewe et al. 2016. For both data distributions, year estimates and 95% credible intervals were back-transformed to annual rates of population change using 100*exp(estimate)-1. Trends were calculated using the full dataset, as well as for all 10-year subsets to estimate 10-, 20-, 30-year (etc., where appropriate) trends for comparison among years over time. Trends are presented as %/year with lower and upper 95% credible intervals, which suggest that there is a 95% probability that the true trend falls within that range. A posterior distribution was also calculated to estimate the support for an increasing or declining trend. A value near 0.5 would suggest equal probability for an increasing and declining trend (little evidence for a change in migration counts over time), whereas a posterior probability near 1 will suggest strong support for the observed change in counts. The posterior probability can be used as a pseudo p-value, such that trends with a posterior probability > 0.9 could be considered to have strong support. Annual indices of population size were estimated as the mean daily count from the posterior distribution of the above model. Plots of annual indices show 95% credible intervals (vertical lines), and the black line and grey shading display a loess fit across indices and upper and lower credible intervals.