Goals : The goals of this survey are to determine population trends of owls (especially Barred Owls) in Atlantic Canada, to gather location information on rare or little-known owl species (especially Boreal and Long-eared Owls), and to involve volunteer birders from across the region in active wildlife monitoring.

Dataset summary : The dataset consists of detections of noturnal owls along survey routes with stops established at 2km intervals along roadside.

Season(s) and frequency : any evening between April 1 and May 15

Applications for the data : Counts used for statistical analysis of population trends, location of rare species, and habitat associations 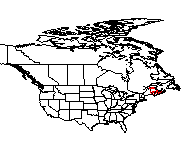