Goals : The BBS is a cooperative effort between the U.S. Geological Survey's Patuxent Wildlife Research Center and the Canadian Wildlife Service's National Wildlife Research Centre to monitor the status and trends of North American bird populations. Following a rigorous protocol, BBS data are collected by thousands of dedicated participants along thousands of randomly established roadside routes throughout the continent. Professional BBS coordinators and data managers work closely with researchers and statisticians to compile and deliver these population data and population trend analyses on more than 400 bird species, for use by conservation managers, scientists, and the general public.

Dataset summary : The North American Breeding Bird Survey (BBS), which is coordinated by the Biological Resources Division and Canadian Wildlife Service, is a primary source of population trend and distribution information for most species of North American birds. The BBS was initiated during 1966 by Chan Robbins and his associates at the Patuxent Wildlife Research Center to monitor the populations of all breeding bird species across the continental U.S., Canada, and Alaska. Approximately 2200 skilled observers participate in the survey each year. The BBS has accumulated 30 years of data on the abundance, distribution, and trends for more than 400 species of birds. These data are widely used by researchers, various federal and state agencies, non-governmental organizations, and the general public. Analyses of BBS data by PWRC statisticians have been instrumental in the development of innovative approaches for analyzing trends of wildlife populations.

Primary species covered : 500+ bird species are surveyed by the BBS in the United States and Canada; trends calculated for 504 species, with varying levels of precision (99 with small sample size, 95 with low relative abundance and 84 with high variance in counts.

Field methods : Counts are made along roadsides, mostly in May and June in the US and June and early July in Canada. All birds heard or seen by volunteers or professional biologists are recorded at 50, 3-minute stops (point counts) along the 39.4 km roadside route. Stops

Data format : All data accessible via the internet

Trends and time series availability : Trends in US and Canada are analyzed by J. R. Sauer, http://www.mbr-pwrc.usgs.gov/bbs/BBS_Results_and_Analysis.html, and B. T. Collins in Canada, http://www.cws-scf.ec.gc.ca/birds/trends/default_e.cfm 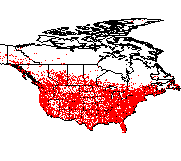