Goals : To help conserve loons by engaging participants in monitoring and education activities, and use loon productivity as a long-term indicator of the health of freshwater lakes.

Season(s) and frequency : minimum of 3 visits (monthly in June, July and August)

Geographic area covered : Primarily southern half of most Canadian provinces where accessible by lake residents or cottagers.

Data format : SQL Server data base, Accessed by BSC Staff and LRTAP scientiests, some availablility on wildspace; data will soon be available on line

Data validation : Lake and lake sections are accurately geo-referenced using the Canadian Geonames database as the main reference source. Data are reviewed by staff knowledgable in the ecology and behaviour of loons, all electronic data is checked against paper data.

Data entry methods : Surveyors have the choice of submitting their observations to Birds Canada on paper or entering them online at Birds Canada's website.

Sample size : Over 4000 lakes have been surveyed across Canada with more than 15000 surveys conducted since 1981, on average of 690 surveys are conducted each year.

Results : Reports and publications are available on line at www.bsc-eoc.org. Data is available if formally requested from BSC (BSC approval required). 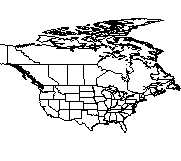