Dataset summary : The Atlantic Canada Shorebird Survey is a migration PRISM survey. It was originally developed in 1974 as the Maritimes Shorebird Survey by Canadian Wildlife Service scientists at the same time as similar surveys in the province of Ontario (Ontario Shorebird Surveys) and the northeastern United States (International Shorebird Survey). In 2003, the Maritimes Shorebird Survey became the Atlantic Canada Shorebird Surveys to include Newfoundland and Labrador. The survey was originally designed to identify important shorebird staging habitats and support their management and conservation. As such, the data have been used to guide the management of landscapes for shorebird species through programs such as Environment Canada’s protected areas program, the Ramsar Convention, the Important Bird Areas program and the Western Hemisphere Shorebird Reserve Network. In addition to guiding the implementation of shorebird conservation actions, this project can also help identify at-risk species and provide population trends through time. CWS will use the data collected to help meet obligations under the Migratory Birds Convention Act, and other partnerships such as the North American Bird Conservation Initiative. Regular data collection at over 100 ACSS sites is coordinated by the Canadian Wildlife Service of Environment Canada as a volunteer-based survey that relies on the skills, dedication and long-term support of birders throughout Atlantic Canada. 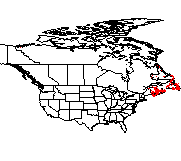