Goals : The primary objective of the Christmas Bird Count is to monitor the status and distribution of bird populations across the Western Hemisphere. The count period, which is from December 14th to January 5th, in North America is referred to as "early winter," because many birds at this time are still in the late stages of their southward migration, so it is not "true" winter. When we combine these data with other surveys such as the Breeding Bird Survey, we begin to see a clearer picture of how the continent's bird populations have changed in time and space over the past hundred years. The information is also vital for conservation. For example, local trends in bird populations can indicate habitat fragmentation or signal an immediate environmental threat, such as groundwater contamination or poisoning from improper use of pesticides.

Season(s) and frequency : one day between December 14 through January 5 inclusively

Type(s) of habitat : All

Sampling Design : Volunteers follow specified routes on foot, by car, bicycle, boat, snowmobile, and by observing feeders within a designated 15-mile (24-km) diameter circle. All birds seen or heard are counted from dawn to dusk on one day of the year between 14th December and 5th January. Optional nocturnal census conducted in some areas.

Trends and time series availability : Trend analyses completed by J. R. Sauer from 1959-1988. New trend analyses being conducted - analyses of boreal species and watchlist species. Custom analyses can be done by interested individuals as for BBS

Applications for the data : Main use is for population status and trends and distribution of early winter birds. In 1980's used for documentation of decline in American Black Duck. Being used to understand status of species that could be put on watchlists.

Environmental assessment : Most frequent use is for information about birds in BCRs and watchlist species. Can be used for EA, but data limited by need to correct for observer effort and non-random location of circles. CBC data used to identify declines in American Black Duck; subsequently hunting pressure was reduced. 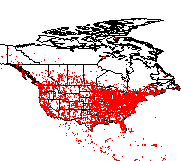