Dataset summary : Monitoring of migrant shorebird populations began in 1974 in Canada by the Canadian Wildlife Service (CWS), Environment Canada, and in Ontario this monitoring program grew from the Maritimes Shorebird Survey (now known as the Atlantic Canada Shorebird Survey). This survey began with the objective of identifying areas important to shorebirds during their spring and autumn migrations. Since then, monitoring shorebird populations has become an increasingly important objective. The Ontario Shorebird Survey (OSS) is unique in that it surveys in-land migrant shorebirds. In fact, it is the only survey of its kind in Canada to do so. Historically, good shorebirding sites have been surveyed for migrant shorebirds as part of the OSS. Examples of these good stop-over habitat types include beaches, wetlands, sewage lagoons, shorelines, and so on. These sites have been surveyed for migrant shorebirds; collecting information on the numbers of birds using these sites will support population trend assessment, and can help conserve this group. In addition, this project could provide guidance for adaptive management for the conservation of this declining bird group, by identifying key areas used by shorebirds, identifying at-risk species, and providing population trends through time. CWS will use the data collected to help meet obligations under the Migratory Birds Convention Act, and other partnerships such as the North American Bird Conservation Initiative.

Years (comments) : Data will be collected annually for the foreseeable future.

Sampling Design : Sites targeted by volunteers; work underway to address this bias (as of 2012-03).

Field methods : Ground surveys. Procedures: count from a designated location, or along a route, the number of each shorebird species present. Effort also made to count other species of wildlife and numbers of each. Equipment: binoculars, spotting scope, GPS unit, notebook, weather meter, and compass. No foreseen affect on park environment. Ontario Shorebird Survey Protocol

Covariables : Habitat data (as collected) is not available for all sites. Bias associated with the site selection has been identified as an issue, but is being addressed. Results of updated site selection will be available in autumn 2012. 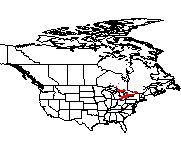